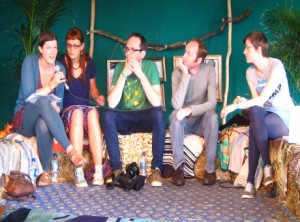 Of the nearly 300 festivals taking place in the UK this summer, we could not have wished for a more pleasant one than the Wilderness festival to host our debate on the Jevons’ Paradox on Sunday the 12th of August. Situated in a wonderful green park estate in hilly Oxfordshire and attracting a crowd already highly committed to environment and sustainability, Wilderness was a grateful audience for a group of speakers who in part were new to presenting to an audience outside the academic context.

On the other hand – and without wanting to brag about it – the topic was well chosen: the Jevons’ Paradox describes situations in which efficiency improvements backfire and increase consumption instead of achieving reductions. When Jevons first formulated this thought in the 19th century, he referred to improvements in the efficiency of steam engines which paradoxically lead to even higher coal consumption because of wider use. This phenomena, nowadays also known as the rebound effect and a daunting omen for carbon reductions, is today as relevant as more than 150 years ago and as Faye put it during the introduction to the debate: “quite scary really…”.

The audience seems to share this unease as they attentively listen to Mike illustrating some less abstract applications of Jevons in our times. He describes how improvements in lighting technology enabled more people to stay up late, read and study, get a better paid job allowing them in consequence to spend more money on things other that light. This is a typical example of indirect rebound, where a reduced energy consumption for one service increases the use of another, potentially more energy intensive service. Oh dear, are we in trouble then?

Paolo points out that from an economic perspective the Jevons paradox is not a paradox at all, introducing ‘cosiness’ as tangible example for a desirable energy service in our homes. The cheaper the unit of cosiness becomes through technological improvements, the more cosiness we may want and energy demand will increase correspondingly. However, Paolo also points out that increased efficiency may produce non-carbon related advantages which should not be overlooked. More efficient heating systems in hard to heat houses may result in an overall higher energy consumption, but more importantly they will increase the room temperature towards a healthy and comfortable level while cutting heating costs and therefore reducing fuel poverty.

This all seems good and correct to Paula, but she can’t help but wonder whether the Jevons’ Paradox really is what we should be worrying about at the end of the day. Isn’t the real question not how to cut consumption but how to cut carbon emissions? On a happy note, Paula presents some success stories from renewable electricity generation, illustrating how creative mankind “is not only in finding new uses for the efficiency surplus, but also in finding new ways to generate carbon free energy.”

And for everyone who believes that this might not be enough, there is Kate who finally argues that conscious demand reductions through behaviour change are possible. BedZED and other housing projects are promising examples where committed individuals have evoked change. And while the role of legislation in influencing behaviour may not be underestimated, education and change of social norms seem to be almost more important here. The introduction of reusable bags in supermarkets is an encouraging example where a sustainable concept could be realized among the masses in a relatively short period of time.

With our timeslot being 45 minutes instead of the planned hour, there was unfortunately less than time than we would have liked to enter into discussion with the audience. But even so, the comments we received are interesting and quite knowledgeable. They ranged from questioning the functionality of free markets over pointing out the limitations of 19th century economics to suggesting that reestablishing the missing link between energy provision and use could help to reduce consumption. Also, there was a call to bring together ideas and solutions from the fields of technology, society and politics – a challenge it is for us to pick up here at the LoLo CDT. And that we will, after this encouraging debate with new vigour.