W6UP1 – Setting energy targets in context: a case study in the construction industry

W6UP1 – Setting energy targets in context: a case study in the construction industry

Setting energy targets in context: a case study in the construction industry


Academic analysis of the energy performance gap has neglected the role of construction contractors in meeting contracted carbon and energy targets for the buildings they build and manage. This dissertation focussed on how energy targets were set in a single case study non-domestic project. Through qualitative document analysis and interviews, it examined the influences and motivations that operated on the construction contractor responsible for the building’s construction and energy management. Its findings suggest that it is not enough for government and clients to set targets that hold construction companies contractually and financially responsible for the energy performance of buildings. What is required is also an understanding of the complex forces acting on the construction contractor, such as: misaligned incentives; commercial pragmatism; lacunae in regulation and guidance; understanding of the needs of the client; client management of expectations; and the difficulties of retaining and sharing feedback. Without addressing this intricate and specific social context, future policy targets for energy performance in non-domestic buildings will find it much harder to succeed in their aims.

This project benefited from the sponsorship of a UK construction company, who provided access to its information and staff.  The case was chosen because it has energy-related targets that have not been met, despite there being contractual incentives to do so.  Instead of exploring why the energy performance was not as planned, the research sought to uncover how and why the energy targets had been set in the first place. The process was inductive, generating explanations through an iterative analysis of data.

The conjunction of sociology and science

This project drew on Science and Technology Studies for its theoretical basis. This interdisciplinary conjunction asks us to reconsider science not as a repository of knowledge, but as a cultural activity whose processes may be studied (Collins, 1992, Shapin, 1995, Bijker, 2003).  These concepts may be applied to energy, in considering the formation of what can appear on the surface to be firm knowledge about a building’s performance or consumption, such as energy targets.  In particular, the study sought to apply Latour’s concept of the “black-boxing” of facts (1987), through which the often complex (and sometimes equivocal) origins of established ideas and processes are obscured.

Findings uncovered a complex web of factors underlying the targets

The dissertation uncovered not one, but a multiplicity, of inter-related issues underlying the formation of the energy targets at the case study site.  These are represented in the diagram below: 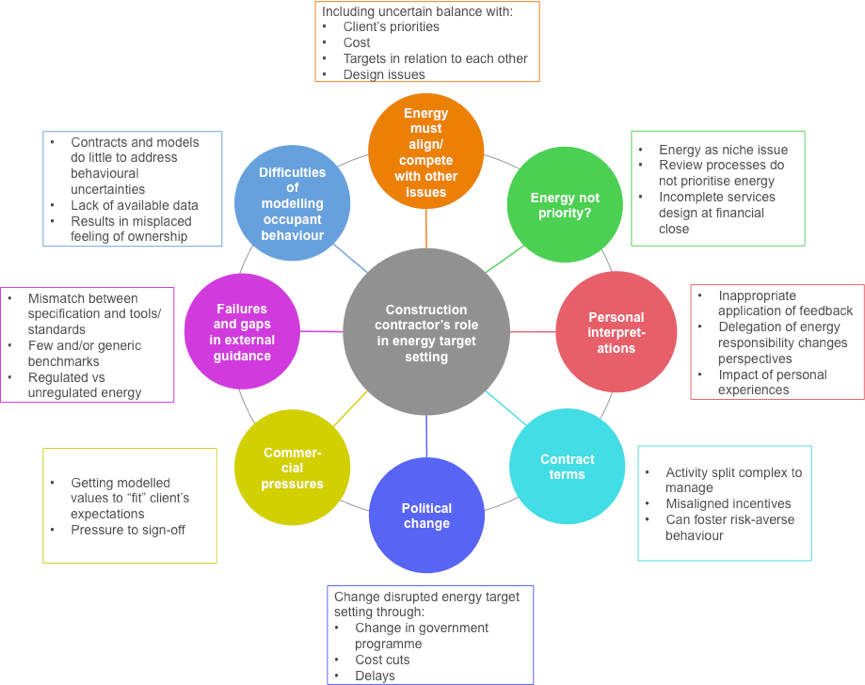 The dissertation concluded that:

Latour, B., 1987. Science in action : how to follow scientists and engineers through society. Harvard University Press, Cambridge, Mass.

W6UP5 - Life in the gap: how does a construction company respond to the challenge of targets for energy and carbon in-use?