Domestic electricity demand-side response (DSR) programmes aim to influence when electricity is used in people’s homes, the better to balance it with supply. In the UK, this is important in permitting anticipated increases in electricity use that growth in electric heating and vehicles will bring, as well as greater penetration of intermittent (low-carbon) forms of supply such as wind energy.

Demand can be managed by alerting consumers to periods of high demand (through price signals or other means) in the hope that they will shift their demand to other times, or by directly controlling services such as heating/cooling and appliances such as fridges in people’s homes. However, research has indicated that some people have concerns about the possible reductions in their personal control that they perceive such approaches could entail. These concerns may lead to lower participation, less opportunity to match demand to supply, and constrain the transition to a low-carbon energy system. 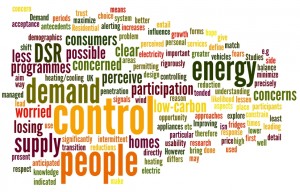 Studies into people’s acceptance of DSR have tended not to rigorously define “control” or to explore it in detail with participants. While it is clear that some consumers are worried about losing it, it isn’t clear:

Improving our understanding in these areas should make it possible to design, target and communicate DSR programmes in such a way as to minimize people’s concerns about any perceived reduction in control, and therefore maximize the likelihood of participation (at least in respect of control).

The project employs a mixed methods approach to answer these questions. A series of exploratory focus groups were used to inform a survey experiment which will be carried out during the course of 2014. Outputs will be posted here as they become available.

In case of interest, the following video is a sonification (or representation of data through sound) of UK electricity demand in January 2013.

Who has the power?: Concepts of “control” in home energy use