Context:
The Open Source Energy System Model (OSeMOSYS) is a simple energy-economic model that runs in the open source GNU environment.  The model was developed in 2009 and has only recently been published in the academic sphere (Howells et al., in press).  OSeMOSYS was primarily created to be simple to use, open to all, free to obtain and transportable for use in developing countries.
The model is an optimisation model, which estimates the lowest net present value (NPV) of an energy system to meet a given energy demand.  However, like most energy- economy models, OSeMOSYS is weak at capturing variations in people’s rationality with regards to energy demand.  Such models assume that people are cost-optimal and rational, and ignore behavioural complexity.

OSeMOSYS can be run in the following way: 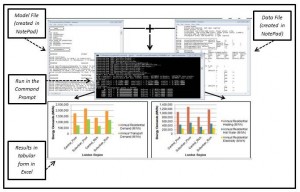 Aims:
1. To understand the ‘wider’ rationalities of people’s energy demand
2. To build a model of London using OSeMOSYS to incorporate behavioural complexity

Research Questions:
1. What are the ‘wider’ rationalities of people’s energy demand?
2. Using intangible costs and benefits, how can these ‘wider’ rationalities be quantified?
3. How can parameters for intangible costs and intangible benefits be incorporated into OSeMOSYS?
4. What are the thresholds at which lower carbon demand-side technologies are taken up in London and how does this vary by region based on income and location?

Method:
The flexible structure of OSeMOSYS is used to include behavioural parameters and equations for intangible costs and intangible benefits.  The intangible values are calculated using the proxies, income and location, and are based on productive time lost or gained.  Due to the memory limit of the model, less relevant supply-side parameters (such as reserve margins and storage) are removed to compensate for the addition of behavioural parameters.
London is used as a case study with four regions of agglomerated Boroughs: central poor, suburban poor, central rich and suburban rich.  The threshold for determining rich or poor Boroughs is £25,900 (taken from UK ASHE 2010) and the categorisation of location is obtained from the GLA’s definition of an inner and an outer Borough: 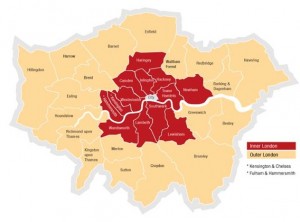 The energy system of London is assumed to have a simple supply side, with the majority of energy being produced outside of the city and imported.  This allows a more complex demand side to be created with the following technologies modelled: 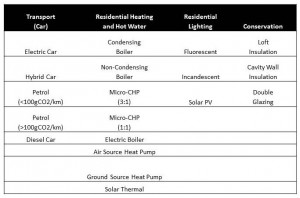 Results:
Non-financial considerations, such as hassle, the influence of peers (family and friends) and the ability to access and process required information, are often important factors that affect people’s decisions to purchase lower carbon demand-side technologies.
The uptake of various technologies in the model runs mostly reflects the current pattern of adoption in the UK.  Condensing boilers and flurescents are increasingly becoming the primary choice for meeting domestic heating and lighting demands and lower carbon petrol cars are progressively penetrating the market.  However, the uptake of other (less established) lower carbon technologies has been limited in the UK and this is reflected in the model outputs. 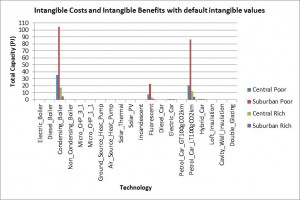 When the intangible values are varied it is clear that policies that can lower the intangible costs and increase the intangible benefits will be more effective at encouraging the adoption of lower carbon technologies, rather than simply focussing on reducing the upfront costs.