W2UP8 – Are shared lighting controls in an open-plan office a potential source of conflict?

Are shared lighting controls in an open-plan office a potential source of conflict?

Occupants are often expected to share control in open-plan spaces. However, the energy saving and occupant satisfaction benefits of manual control could be undermined by shared controls, particularly if conflict situations arise. This project studied the potential sources of conflict with shared lighting controls. The research also used the BUS (Building Use Studies) survey to compare occupant satisfaction in the case study building to a benchmark dataset.

Manual controls can reduce lighting energy consumption by minimising unnecessary use of light, for example when spaces are unoccupied (Slater et al., 1996), they also provide the ability to operate the lighting below its maximum illuminance (Moore et al., 2002). The provision of control improves occupant satisfaction (Leaman & Bordass, 2001), motivation and vigilance (Veitch et al., 2008). The topic of conflict with shared controls has received little focus in previous research; however, the well documented variation in individual lighting preferences (Moore et al., 2002; Tregenza et al., 1974; A Slater et al. 1996) provides reason to believe there may be conflict when occupants are expected to share control. Occupants with comparable working environments and tasks select very different illuminance levels when given the opportunity (Tregenza et al., 1974).

Previous research suggests that daylight level influences lighting preferences and the use of control (Escuyer & Fontoynont, 2001; Roche et al. 2000); therefore, daylight variability amongst those who share control may be a potential source of conflict. 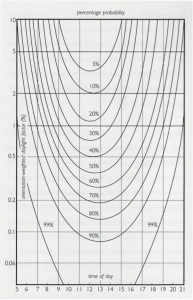 The graph opposite was originally developed in 1985 by the Building Research Establishment (BRE, 1985), and has been reproduced in more recent lighting guides (Loe & Mansfield 1998, p.12; CIBSE 1994, p.148). This shows that with a higher daylight factor, the probability of an occupant manually switching lights on when entering the room decreases, clearly demonstrating the relationship between natural lighting and switching behaviour.

The research took place in a case study building (image above), which has recently been refurbished. A quantitative lighting survey was written and administered to all members of the open-plan areas in the case study office, these are the students and researchers rooms illustrated below. The survey aimed to assess occupant perceptions of the office lighting, along with their preferences for different strategies. To assess potential conflict, the survey data was grouped according to those who will share control, the groups are indicated in green on the diagram below. 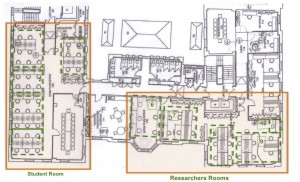 This was followed up with the BUS (Building Use Studies) survey. This was developed by Building Use Studies Ltd to assess the success of non-domestic buildings and create a benchmark dataset. The results of this survey were used to compare the case study office to the benchmark data available. A lux-meter has been used to measure the level of artificial and natural light at individuals’ desks. The natural light level was used to calculate daylight factor for individual’s that will share control. Daylight factor is quoted as a percentage of the external illuminance, which is ideal for this study as it is directly comparable for each desk.

When compared with the BUS benchmark dataset, overall the lighting in the case study building was rated within the benchmark upper and lower limits; it is comparable with many other office buildings. However, the occupants rated the artificial lighting as ‘too high’ and the level of control as ‘too low’. Both of these factors were rated outside of the benchmark limits. The average measured artificial light level in the case study building was 594 lux, this is significantly higher than the CIBSE recommended guideline of 300 – 500 lux (Ruffles, 2005). The lack of control in the case study office at the time of the study means it was operating outside of the Building Regulations.

To assess potential sources of conflict, the level of disagreement between individual’s lighting preferences has been calculated (see equation below) for each shared control group. The difference in response between each pair of group members was calculated and divided by the number of group members to normalise. Each variable was measured on a scale of 1-7; hence, the maximum disagreement index is 6.

Disagreement indices have been calculated for responses to the lighting survey questions regarding occupants’ perception of lighting at desks, preferred natural and artificial lighting mix and control preferences. For each factor, there is a single disagreement index per group, this is indicated by a point on the plot below. 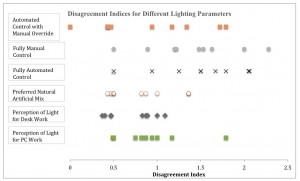 All of the calculated disagreement indices are below 2.5, suggesting that generally the occupants of each group have similar lighting and control preferences. This indicates that within the case study building, occupant lighting preferences are unlikely to be a source of conflict. To build on the work presented here, the occurrence of conflict needs to be assessed when the controls are in place.

The calculated daylight factor ranged from 0.07 % to 17.64 % at individuals’ desks. The relationship illustrated previously has been used to estimate the probability of switching a light on when entering a room, for each occupant. The results indicate a highly variable switching probability within some lighting groups, this can be as extreme as one group member being 99 % likely to switch a light on, whilst another is only 5 % likely. This is recognised as a potential source of conflict.

The artificial light level in the office is above CIBSE recommended levels and the office occupants rated it poorly on the BUS Survey. Consequently, an immediate recommendation to the building owners is to reduce the entry scene setting of the artificial lighting. A second recommendation is to immediately administer the proposed hand-held controllers to the building occupants. This will bring the building in line with the current Building Regulations and hopefully improve occupant satisfaction.

The use of occupant preferences to assess potential conflict revealed that variation in individual preferences is unlikely to be a source of conflict in this example. It is suggested that future work looks at the level of conflict when the controls are in place, this may be used to validate the disagreement index calculation used here.

Loe, D. & Mansfield, K., 1998. Daylighting Design in Architecture: Making the Most of a Natural Resource, BRESCU on behalf of BRE.

The BUS survey was written and provided under licence for this study by the Usable Buildings Trust. Their webiste contains recent publications and infomation regarding post occupancy evaluation.

Paper presented at the People and Buildings Conference for Masters Students hosted by Arup on 23rd September 2011.

Could shared lighting controls cause conflict in open-plan offices?

Click here to view outputs
This paper was produced for the People and Buildings Conference for Masters Students. The paper was also presented during the proceedings.

Do shared lighting controls cause conflict?

This poster summarises the MRes dissertation in a concise way. The poster was displayed at the LoLo CDT Annual Colloquium 2011.

Click here to view outputs
This research was presented at the ‘Energy Efficiency and Occupant Behaviour: Research Findings & their Implications for Building Professionals’ Sponge workshop hosted by the UCL Energy Institute. Sponge is a network of young property and construction professionals who share an interest in sustainable development. The workshop provided an opportunity for attendees to hear about how this research can provide insights into building user behaviour and illustrated the potential value to building professionals of understanding behavioural characteristics and variation. The event included a presentation of this project with follow up round table discussions. The work presented was featured in an article on sustainability published on the NBS website (see link). NBS offer specification and information solutions to construction industry professionals.

W2UP7 - How can high-resolution temperature traces be used to assess building thermal performance?

W7UP13 – “Everything you always wanted to know about SAP..but were afraid to ask"