W2LP5 – Extensions to Domestic Buildings and their Impact on Energy Consumption

Extensions to Domestic Buildings and their Impact on Energy Consumption


In a survey of 575 houses 19% had been extended.
The average additional energy consumption, according to an rdSAP assessment, due to the extensions is 16%.
If scaled nationally this would equate to 3.8% increase in England’s domestic energy demand.
This is of similar magnitude to the impact of a typical energy efficiency refurbishment in stock models [Firth and Lomas, 2009].
The implied importance of a house’s inividual geometry calls into question the validity of a bottom-up, archetype based stock model.

The energy impact of extensions, defined as the percentage increase in total household energy consumption caused by an extension, has been investigated and quantified. This has been achieved through a two-step process. Firstly, a set of typical extension sizes and prevalence was defined through a survey using publicly available aerial imagery and GIS mapping software. Secondly the energy impact of these extensions was predicted through the application of a reduced data Standard Assessment Procedure. A catalogue of extension types has been created and statistically significant relationships between extension prevalence and tenure, household income and building archetype have been proven. The energy impact of extensions has been estimated to be 16% on average across all building and extension types; which would account for 3.8% of England’s domestic energy demand if the results of this study were scaled nationally.

The UK made a legal commitment to an ambitious carbon emissions reduction target of 80% of 1990 levels by 2050 in the Climate Change Act of 2008 [H.M. Government, 2008], whilst in 2010 the residential sector represented 17% of the UK’s total carbon emissions [DECC, 2011]. The government has made reducing emissions from the domestic sector a policy priority [H.M. Government, 2008], therefore accurately measuring the effectiveness of these policies will be crucial over the next few years.

One well established approach to assessing the likely effectiveness of energy CO2 reduction interventions is through the use of ‘bottom-up’ domestic stock models [Firth et al, 2010, Jones et al., 2007, Natarajan and Levermore, 2007, Boardman et al., 2005, Johnston et al., 2005]. These models break the housing stock up into groups of similar dwellings represented by a single archetype (a notional typical example that represents the sub-set) and calculate the energy demand of each based upon a the properties assigned to it [Swan and Ugursal, 2009].

If extensions and conversions to houses contributes a significant percentage of total UK energy demand, and yet remain unaccounted for, they could mask the impact of energy efficiency policies. Furthermore, if unaccounted for in the stock models used to inform these policies, they could skew predictions and lead to misleading conclusions. Even though the importance of built form on predictions of housing stock models has been highlighted [Firth et al, 2010, Cheng and Steemers, 2011], the impacts of extensions have not been studied.

This study seeks to define the size, shape and prevalence of extensions to buildings within England and to estimate their energy impact based upon these dimensions. Where the ‘energy impact’ of an extensions is defined by the percentage increase in energy consumption that it’s addition is predicted to cause. Having quantified the energy impact of extensions conclusions are drawn upon their significance in the context of stock models. In order to address this aim a set of research questions were developed:

In what way do extended houses typically differ geometrically from their parent (the un-modified original building) buildings?
How prevalent are extensions and are there any relationships between their prevalence and the socio-economic characteristics of the occupants?
What is the possible energy impact of these extensions?
What implications does this variation in predicted energy consumption due to geometrical differences have on the validity of the bottom-up stock modelling approach?

The surveying was carried out using publicly available aerial and on-street imaging, using a combination of Google’s Street View and aerial photography and Bing’s 45o Bird’s Eye photography. This allowed the identification of an extension or loft conversion, the dimensions of which were then measured using ArcGIS mapping software.

To enable an investigation into the links between the likelihood of a house being extended and socio-economic variables such as household income and tenure, the dwellings chosen for the survey were those included in the 4M project, referred to as the L575 houses, [Lomas et al, 2010] which provided information about each of the householders. This dataset of 575 houses in Leicester has been constructed to provide a statistically representative sample of the housing stock of the city.

The database of extended houses that had been created was then sub-divided, first by parent building archetype and then by extension type. The parent buildings were divided into three archetypes: terraced, semi-detached and detached; the dimensions of which were as defined in the BRE’s Standard Dwellings for Modelling [Allen and Pinney, 1990], which was also used in Firth and Lomas’ Community Domestic Energy Model (CDEM) [Firth and Lomas, 2009]. The extension types were identified based upon the results of the survey and then combined with the measurements taken to create the taxonomy – this is a catalogue of extension types with prevalence and average size for each type.

The catalogue diagram for terraced houses describing each extension type is shown below.

An rdSAP [DECC, 2010, Appendix S] building energy assessment calculation, carried out in NHER Advisor, was the primary tool used for estimating the energy impact of the extensions surveyed. Firstly an rdSAP calculation was carried out for each of the unmodified archetypes and then for each of the parent building plus extension combinations identified in the taxonomy; the energy consumption of the former was then subtracted from that of the latter to calculate the energy impact.

The energy impact of extensions on a nationwide scale was estimated by applying the observed occurrences of each extension type to the total number of houses of each archetype in England. This gave an estimate of the total number of un-modified and extended houses of each type in the country. The totals were then multiplied by the energy consumption calculated for each un-modified and parent plus extension case to give a total consumption accounting for extensions. 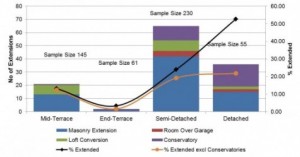 Just over 19% of the houses in the survey had an extension, with detached houses being the most commonly extended.

Statistically significant relationships, at the 1% significance level (p<0.01), have been found between the presence of an extensions and housing archetype, tenure and household income, they suggest that houses are more likely to be extended if they:

Are occupied by households with higher incomes
Are owned by the occupier
Are detached or semi-detached, rather than terraced houses
A range of energy impacts of between 7.4% and 33.3% was observed, referring to a single storey extension to the front of a detached house (D7) and a two storey extension to the side of a semi-detached house (S1) respectively. 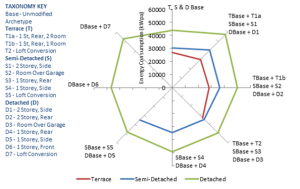 19% of buildings surveyed had an extension or conversion.
A taxonomy describing the size, shape and prevalence of these extensions was developed.
Statistically significant relationships (p<0.01) have been found between likelihood of extension and tenure, household income and parent archetype with the relative strength of the relationships in that order.
A range of energy impacts of between 7% and 33%, with a mean impact across all extension types of, 16% has been estimated.
An estimate of the energy impact of extensions on an England-wide scale of 3.8% has been calculated, which is of a similar magnitude to the impact of a typical energy efficiency retrofit.
The average energy impact of the extensions in this survey was 7% higher than that of simply expanded equivalents of the parent building.

Click here to view outputs
I presented this paper at the Network for Comfort and Energy Use in Buildings’s 2011 People and Building’s Conference. It gives a brief description of some of the results of the dissertation.

This poster was presented at the Midlands Energy Graduate School’s Second Annual Conference in September 2011.

This presentation was given to the stakeholders, students and staff of the Lolo Centre at the 2011 Annual Colloquium.