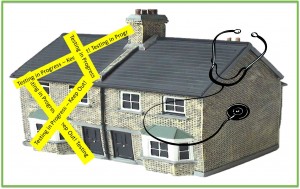 The research in this PhD seeks to make widespread measurement of whole-house thermal performance a practical reality through development of a new testing method, the ‘Loughborough In-Use Heat Balance’. The innovation of this method is that it can be carried out while a house is occupied (or ‘in-use’) with very little impact on the way that the house is used. The result is a test that can be conveniently applied with significantly lower cost than existing methods, the most widely used of which is the ‘co-heating test’ which requires a house to be empty for a period of at least two weeks for a measurement to be carried out.

This opens the door for widespread measurements of housing performance, especially if combined with emerging data streams such as those of smart meters. This is important given the evidence that has been collected to show a ‘performance gap’ between the actual and estimated fabric thermal performance of houses, using traditional audit-style summations of elemental performance. This evidence has shown that in the majority of cases the actual thermal performance is lower, and often significantly lower, than was expected. Accurate measurements of thermal performance could enable changes in the way that buildings are built, retrofitted and managed. These could include quality assurance of building works and interventions, targeted remedial actions to make the most of resources, and providing information to promote the benefits of energy-saving measures, both for industry and policy makers.

The research has been carried out in an empirical manner, using the excellent test house facilities at Loughborough University. A two-year testing campaign has included research into the co-heating test, including participation in the NHBC Review of Co-heating Methodologies (Butler & Dengel, 2013). This research has resulted in the development of a new method for quantifying solar gains during co-heating tests, improving the repeatability of test results and extending the period of the year during which tests can be carried out.

Successful comparative demonstrations between the results of co-heating and new in-use heat balance tests have been carried out. Over the course of these demonstrations the effects of variations in occupant behaviour, weather and building structure on the uncertainty in the result of the in-use heat balance have been investigated and quantified. Synthetic occupancy has been used to quantify the effect of a range of occupant behaviours including heating practises, window opening, internal gains, hot water use and window covering. The method has been successfully demonstrated against benchmark measurements provided by a co-heating test in an occupied house, and in a project carried out in conjunction with the Energy Technologies Institute (ETI) and Innovate @ PRP Architects before and after a retrofit (Jack, Loveday, Allinson, & Porritt, 2015). This testing has provided a thorough proof of concept for the Loughborough In-Use Heat Balance, which is already being used in a commercial demonstration project to measure the change in performance resulting from a series of retrofit measures.

Winner of the CIOB Award for Best Academic Paper

A poster presented at the 2012 Lolo Annual Colloquium giving an overview of the first year of my PhD research.

Practical Measurement of the Thermal Performance of Houses

Article outlining the development of the Loughborough In-Use Heat Balance.

W1UP4 - Understanding the interactions between occupants, heating systems and building fabric in the context of retrofit of social housing