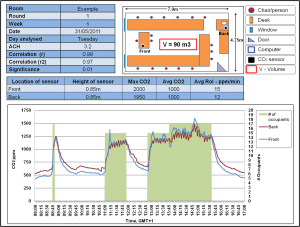 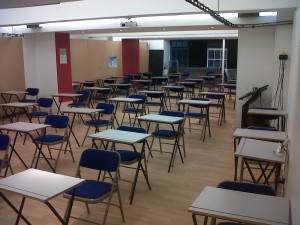 A study by the Carbon Trust known as “Act on CO2”, states a typical school uses 58% of its energy on space heating (CarbonTrust 2010). Inefficient use of heating can contribute to unnecessary energy losses through overheating and inefficient building stocks can increase energy losses through exfiltration. However, a balance is needed between energy efficiency and indoor air quality where human health standards need to be met whilst minimising energy losses. This research addrsessed the by assessing air flow in a room based on the dispersion and distribution of metabolically produced CO2. Measuring the CO2 also allowed for the analysis of the levels of indoor ventilation rates and thus indoor air quality. Four school classrooms in two different buildings, constructed in the 1790s, were used to investigate this. One building had been refurbished in 2008 and was well insulated and the other which had not been refubished had little insulation throughout. The research highlighted the issue of finding an adequate balance between indoor air quality and energy efficiency.

The Building Bulletin 101 issues guidelines for ventilation and indoor air quality for schools which state that; an average of 1500 parts per million (ppm) during a taught day should not be exceeded (BB101 2006). A minimum daily average of 5 l/s per person and the capability of achieving a minimum of 8 l/s per person at any occupied time is recommended as this is said to control the concentration of CO2 to acceptable levels below 1500ppm and 1000ppm respectively (BB101 2006).

The level of CO2 concentration is dependent on: the number of occupants, the activity level of the occupants as the more active an occupant, the higher the amount of CO2 that will be produced, and the ventilation rate which affects the concentration of CO2 (Hedge 2009). In terms of occupancy, schools are known to have one of the highest occupant densities in the built environment(Daisey et al. 2003; Coley & Beisteiner 2002; Mysen et al. 2005).

Research into indoor air quality in UK schools by Coley & Beisteiner (2002) discovered in a study of seven classrooms in four schools that the average CO2 level exceeded 1500 ppm and ventilation rates were below the recommended rates as stated in the BB101. Schools investigated globally such as research conducted in Greece, the Netherlands, Portugal, Sweden, and the United States of America support the findings made in the UK schools (Stavrakakis et al. 2008; Van Dijken et al. 2006; Almeida et al. 2010; Daisey et al. 2003; Smedje et al. 2011).

Current studies have found the elevated CO2 concentrations in school classrooms affect the cognitive processes of the students such as concentration levels and can lead to a negative impact on learning ability(Griffiths & Eftekhari 2008; Mendell & Heath 2005; Mumovic et al. 2009; Clementscroome et al. 2008). Children are also more susceptible to the health effects of poor indoor air quality due to their higher volume of air to body ratio (Santamouris et al. 2008). Combining the factors discussed with children in education spending the majority of their time outside of the home at school, exemplifies the evident reasoning for adequate indoor air quality to be maintained in school (Becker et al. 2007).

The classrooms monitored during this research were located in two buildings. The construction of the buildings was completed in 1792 and currently one of the buildings referred to as campus 1 has had little upgrade to the building fabric whereas the other building referred to as campus 2 was internally refurbished in 2008. Three rooms were monitored in campus 1 and one room was monitored in campus 2. All of the rooms rely on natural ventilation from the use of windows in the room.

The selected rooms were chosen with the intention of having varying ventilation strategies so comparisons of potential influencing factors could be analysed. A minimum of two sensors per room was decided and the placement of the sensors was strategic in order to measure the CO2 concentration at varying heights and sections within the rooms.

The monitoring equipment used for this study, are a Telaire® 7001 CO2 sensor and a HOBO U12 data Logger. In addition to the CO2 sensor and data logger, a laptop computer was used to collect and store the data from the HOBO U12 data logger when necessary before the memory capacity of 43,000 measurements was expended. Data collection consisted of recording a value every minute. 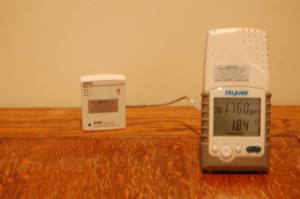 Positioning of the CO2 sensors in each room varied throughout the experiment. Each scenario, such as one sensor at the front of the class at desk height and one sensor at the back of the class at head height was referred to as a round. Two rooms in campus 1 had three rounds in order to maximise comparisons between different zones and heights in the room over a total of 7 weeks of monitoring. The remaining classroom in campus 1 had two rounds during examination week which lasted for one week. Campus 2 was monitored during exam week and consisted of one round having relocated two of the sensors from campus 1 midway through exam week to campus 2.
Analysis methods

In order to best compare the relationship between the CO2 values recorded at each sensor in each round, three main analysis methods were used, the Pearson’s correlation coefficient (Pearson’s r) test, the rates of increase of CO2 and the hourly air change rate (ach). The correlation was used to observe how similar the trends of CO2 concentrations are between the sensors, this indicates how closely they rise and fall in relation to time. The rate of increase is calculated to observe any differences in magnitude of CO2 concentrations in the different zones of the room. The hourly air change rate was used to assess the airflow in the room which could impact the CO2 distribution.

James Hedger talks about this project:

W2LP2 - What impact does a resistance path-way have on zonal air flow in naturally ventilated buildings?