On Friday 13th April, students from the LoLo CDT and Loughborough University’s Low Carbon Building Design and Modelling Master’s course had the opportunity to visit Interserve’s Passivhaus office at the Watermead Business Park on the outskirts of Leicester where we were very cordially hosted by John Walkerdine. Constructed in 2011 and designed to house 60 staff, the office is the first to achieve Passivhaus Carbon Neutral certification in the UK and in its first winter of occupation has already achieved high energy performance, with its latest energy bill totalling less than £12!

The trip provided a fascinating insight into the practical application of the simple design principles that form the basis of Passivhaus which is based on the tenets of orientation, air tightness, and insulation. The office features super-insulated walls and foundations along with triple-glazed windows to keep heat in during the winter months and the office cool during the summer. This has the additional benefit of superb noise insulation which was particularly noticeable given the peaceful atmosphere inside despite the proximity of a busy dual carriageway.

The office also boasts an extremely high level of airtightness of less than 0.6 air changes per hour. This is achieved by minimising the number of ingresses into the building, the use of a wet plaster interior layer, and paying particular attention to the design and construction of the sealing around windows and changes of material. It is felt that the use of a wet plaster finish provides the dual advantage of high air tightness performance as well as providing an air tight membrane that is easily understood and monitored. This has practical implications; for instance, all electrical sockets are placed in interior stud walls and any wall hangings must be carefully installed with the application of a silicon sealant.

The office is also orientated so that one of its two largest facades faces south with a high glazed proportion; this takes maximum of advantage of solar gains for heating and day-lighting. These gains are managed through the building management system which automatically adjusts the angle of the exterior blinds and the level of electric lighting to optimise the input from the sun whilst avoiding glare.

In addition to these simple design methods, the office features earth tubes buried 1.5 metres beneath the car park of the office. The air input to the ventilation system passes through the tubes which utilise the Earth’s stable temperature (the tubes stay at around 11oC year-round) to provide pre-heating in the winter and cooling in the summer. The technical wizardry of the ventilation system doesn’t stop there; there is also a heat recovery system which harvests heat from the stale air which is being removed from the office by the ventilation system to warm the fresh air from the earth tubes. These measures mean that only a 6kW air source heat pump plant is required to provide any additional heating, even with an external temperature of as low as -15oC – brrr!

The office also has a large solar PV array on the south-facing roof space which was installed just in time to take advantage of the higher feed-in tariff. With this rate, the anticipated pay-back time is only five years, whilst the array also saves enough emissions to allow the office to be certified as carbon neutral.

One of the most interesting aspects of the tour was the demonstration of the Building Management System which updates in real time to show the internal conditions, energy consumption, and plant operating status in the office. The group felt that this provided an easy to understand ‘map’ of the building that really helped to conceptualise the processes behind the office’s energy consumption.

Beyond the technical aspects of the building, there was interesting discussion around the user experience of the building and the use of Passivhaus as a standard rather than BREEAM. Although no formal post-occupancy analysis had taken place at the time of writing, it was felt that there had been a very positive reaction to the building, particularly due to the quietness and brightness of the building. Only minor reservations had been raised, such as a resistance to the move from personal offices to an open plan format and with glare from particularly low sun angles experienced during mid-winter.

John was also very keen to highlight the ease of use of the Passivhaus standard in a commercial setting. This is concentrated on results and bottom-line costs rather than the more prescriptive approach of BREEAM. This allows more flexibility in design so that the building can be tailored specifically to the application to achieve the lowest construction and in-use cost, which is by far the most important driver in a commercial application.

Interestingly, encouraged by the success of this office in achieving very low energy bills, the landlord at Watermead is planning to offer rental rates that include energy bills for new Passivhaus builds on the site. It is hoped that this will encourage organisations that might be wary of the higher up-front cost by reducing their risk, whilst simultaneously taking advantage of the cost savings provided by energy efficiency to create a profit. Perhaps this somewhat echoes the ethos of the Government’s Green Deal policy for the residential sector. This pricing strategy provoked an interesting debate as to whether the energy performance of a tenant who did not have the financial incentive of paying their own energy bills would be competitive with those who do. Perhaps this could provide an interesting case study for future LoLo students if it goes ahead!

On behalf of LoLo and those who attended, I would like to thank Interserve and John Walkerdine in particular for an enlightening and thought provoking visit. I don’t think the value of these interactions with ‘real life’ for those in academia can be overstated. All who attended were left with a greater understanding of not just Passivhaus design and operation, but also how this can be incorporated effectively into a sensible business plan. 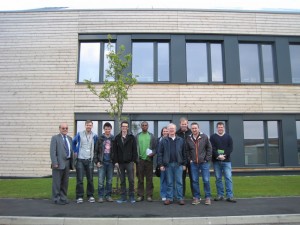 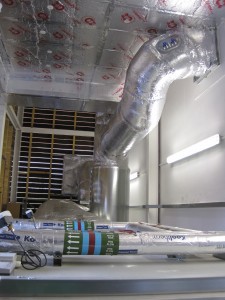 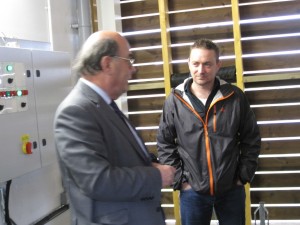