So far, in my path I have benefited from STEM subjects (science, technology, engineering and mathematics) and associated fields. This is why I have often wondered, what does it take to convince young girls of the advantages of a career in STEM areas? Growing up at a time and within cultures where there was no particular push for women in STEM, all that reached my ears was the prospect of an on-demand future job, along with cues for daydreaming about its subsequent benefits. In my child and later teenager worldview, this did not seem enough of a reason to choose to do something.

Around grade three, I gravitated toward math, because I did not feel at risk of being misunderstood w 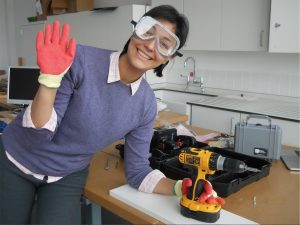 hen expressing myself orally or in writing, as I did with other subjects. At a time when I found it difficult and stressful to communicate through language, math became a tool and a window into my mind. When physics, geometry and calculus were introduced as standalone subjects in high school, I remember being elated. By then I had tamed my language issues just to the degree I needed in order to excel in these subjects. Knowing that I could also combine my interest in building aesthetics and functionality, civil engineering became my desired path for university.

As a young woman entering adulthood, I was confronted with issues surrounding my ‘voice’ and identity, and was struck by the effect image notions had. At that point, applied science and engineering did not offer me any relevant answers, so I worked as a fashion and commercial model during and after my undergraduate studies, learning and applying non-verbal visual communication tools and exploring the plasticity of my own image. Juggling studies and work of such different nature forced me to strictly compartmentalise aspects of who I am and what I do. Although a useful skill, in time it developed into a reflex that became stressful in it self, because as I grew into an independent adult it opposed a developing organic need for me to stand as an integral whole. My following employment endeavours were not succeeding in pulling together learnt skills and previous experiences.

Finally, I found the opportunity to forgo compartmentalisation in the form of the LoLo CDT. The programme encouraged integration of my interests in technical and behavioural subjects, as well as my personal development. It provided the financial means and the necessary network for me not only to learn, but also to apply and test repeatedly a variety of new skillsets developing an awareness of how solid my foundations as a researcher were becoming. With regard to shaping my research topic, LoLo’s support for interdisciplinary work, combined with continuous solid guidance from my supervisors, allowed me to form a project that falls within the grey area between technical and occupant behaviour issues in buildings. LoLo has supplied the ground, space and tools for me to realize that such intersectional areas are the ones most suitable for applying my skills and the ones I most enjoy contributing to.

In all, STEM has opened up new directions of growth for me, as well as opportunities to showcase diverse skills and interests, contributing to my sense of independence and empowerment. It has been like a box of tools I have been given to use and be creative with, rather than a box that confines me. It took time for me to realize this, perhaps affected by the biases associated with STEM in the past. This is why I support STEM awareness in children and teenagers, especially girls, by making aspects of STEM relevant to the needs and preoccupations of their changing worldviews from play and creativity, to notions of self-image and social structures.