Finishing my Master of Research in September 2019 I was looking for more specific training in the area of peer-to-peer (P2P) energy trading to kick-off the research for my PhD. I came across the InfraTrain Autumn School which is a free one-week course offered by TU Berlin and is designed to promote the training of Master students, PhD-students and post-docs as well as junior practitioners and policymakers.

The training took place in the premises of TU Berlin from the 7-11th October 2019 offering five different training sessions including Modelling Resource Markets, Water Economics, Applied Econometrics in Environmental and Sustainability Economics, Computable General Equilibrium and Energy System Analysis and Stochastic Electricity Market Modelling with the Applications to Peer-to-Peer Trading. All courses were supported by researchers from the TU Berlin as well as invited guest lecturers from universities across the world.

I chose to participate in the stochastic modelling of electricity markets which was taught by Prof Yury Dvorkin from NYU who gave us insights into his research on Chance-Constrained Optimal Power Flow (CC-OPF). OPF is a method commonly applied by transmission and distribution network operators to identify optimal operation of the electricity network to meet the energy demand often with the main aim of minimising operation costs and maximising grid stability 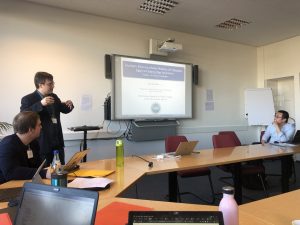 . However, OPF does not sufficiently consider uncertainties which arise when distributed energy generation (DER) is integrated into the energy mix. The intermittent nature of DER can increase the risk of exceeding line ratings in certain situations when not properly balanced which can lead to blackouts. CC-OPF is based on OPF-analysis, however, CC-OPF considers fluctuations and uncertainties introduced into the energy markets by DER. CC-OPF is based on a stochastic model which solves a convex, deterministic optimisation problem. It calculates the probability of a certain random event happening to suggest the most optimal solution to operate energy resources in the electricity network. The application of CC-OPF can enable a more decentralised and competitive energy market approach in the future.
The first two days of the course focused on chance-constrained wholesale electricity pricing and distributed electricity pricing. On the third day, an introduction into the application of the programming language Julia was given to solve optimisation problems using the optimisation software Mosek. On the fourth day, the group was divided into different subgroups working on applications of CC-OPF in the electricity market. The outcomes were presented on the last day.

Similar to transmission and distribution grids, peer-to-peer energy trading platforms will also have to deal with multiple actors like consumers and prosumers and uncertainties around energy generation from solar PV but also consumption. The lectures taught at InfraTrain where very insightful to understand how OPF could be applied to allow optimal operation of P2P platforms which will become increasingly important as more intermittent generation will be connected to the network and short-term peak loads through EV charging will increase the operation complexity.

Besides the exciting insights into stochastic electricity market modelling, InfraTrain offered a great opportunity to meet and exchange with researchers from across the globe. Attendees came from Columbia, Belgium, USA, Russia and more. In total, more than 11 countries were represented. For me, the most valuable experience was to get to know research groups from other universities working on similar topics and to understand their approach towards a future smart energy system. Although the days were filled with lectures and seminars the evenings were used to socialise with all participants while also getting to know Berlin. The InfraTrain School for 2020 is already scheduled and I am looking forward to hopefully participate again.