On the 8th March 2012, a contingent of 2nd year students from Loughborough and UCL attended an organised tour of E.ON’s Ratcliffe-on-Soar Power Station in the East Midlands. This LoLo CDT event provided a great opportunity for the students to appreciate the extent of processes behind a fossil fuel based energy supplier, something which we as a group are aiming to reduce.

Upon arrival, we were given a presentation by our hosts to be for the day, Mike, Mick and Malc. An overview of the power plant structure and design was the topic of the presentation in preparation for the tour. A short Q&A followed with some interesting questions, such as:

This was in regard to the amount of gypsum produced from the coal processing after it passes through the treatment plant. The answer was that it isn’t a main source of income but they have an agreement with British Gypsum that collect it and use it for plaster boards. This agreement means it doesn’t go to waste which gives E.ON one less thing to worry about and also makes British Gypsum happy.

As part of the energy production, water is needed to be converted to steam in order to power the turbines that generate the electricity. Purified water is used to produce the steam in a closed loop system which heats the water up in the boiler and passes the steam through to the turbines which power them.  However, the steam needs to be cooled and condensed in order to continue producing steam for the turbines. To be condensed, it passes through the condenser which is where the cooler river water is pumped through. Please note that the river water and the purified water are kept separate in their pipes to avoid contamination of the purified water as that can cause serious complications to the system. The cooler river water takes the heat from the steam and condenses it back to water. The now hotter river water is then pumped through to the cooling towers which is sprayed into the air (within the cooling tower) and cooled by the wind drawn through the towers before settling in a pond and being returned to the river. The water generally returns a few degrees higher than the winter temperatures at about 15 degrees celcius, however, in summer when water temperatures are higher, it is returned at more or less the same temperature. The water quality meets environmental standards and causes no harm to the environment.

At the end of the presentation we were given the necessary Personal Protective Equipment (PPE) for the tour which consisted of a fashionable hi-vis bib, safety goggles and hard hat with ear protectors. Looking the part and ready to go we were split up into groups of four and the tour began.

We started off being taken to the depot where the coal is brought in by rail from a mine in Scotland. Each train trolley carries at least 1,500 tonnes of coal at a time and the train we saw coming in had at least 10 trolleys. We were told they can get up to 35,000 tonnes of coal a day. Physically seeing this amount of coal being delivered to meet the daily needs from just one of the power stations in the UK makes a striking impact and can get you wondering –  just how much coal can we really have left?

From the delivery point, the coal either gets placed onto a stockpile which is used when the mines are low on production or sent straight to the plant for processing.  The coal gets crushed to a fine coal dust and then burnt in the furnace for steam production.

To minimise the impact on the environment, two methods are used to reduce the amount of Nitrogen Oxides (NOx) and Sulphur Dioxide (SO2).  The Boosted Over Fire Air (BOFA) method is used to reduce the amount of NOx into the atmosphere. BOFA works by using two fans at the basement of the boiler to force air into the higher section of the boiler. This causes coal to burn at a lower temperature and in turn reduces the amount of NOx produced. The ‘over fire’ air which is injected into the boiler above the main burner mixes with the tails of the flames and this increases the area available for NOx levels to be reduced (http://www.eon-uk.com/downloads/BOFA.pdf).

The Sulphur Dioxide is removed in the Flue Gas Desulphurisation Plant. The process mixes the exhaust fumes from the boiler with limestone which produces calcium sulphite, also known as gypsum, as mentioned previously (http://www.eon-uk.com/downloads/FGD.pdf).

The final section of the tour took us to the control room which is responsible for the rate and timing of production of gas and electricity. The first impression of the control room is that it was furnished like the control room in Star Trek from the mid-1960s. Despite the equipment looking like the work desks had no electronics connected behind the surface; it soon became apparent how much of a complex, intricate system it is. The basics behind the operation in the control room are that the National Grid will provide them with the amount of energy demand that is expected over the course of the day at 30-minute intervals whereby the control room has to alter the energy supply to meet this. We were told that it is usually quite predictable as historical data of people’s patterns act as a good indicator of what to expect on a daily basis. Occasionally however, they find themselves overwhelmed by demand when an unexpected factor works into the demand system. The example provided was during the royal wedding. They had predicted the amount of energy that would be needed to power the kettles at the intervals but didn’t account for the sudden spike of kettle boiling and toilet flushing when the newlyweds went to sign the register and disappeared off screen. The extra toilet flushing caused a huge demand to run the pumps and consequently left them with a shortage of supply.

At the end of the day, we returned our PPE and left the power station with a deeper appreciation for the scale of resources needed to meet our demand. It acted as an enforcer to the importance of our cause in the conquest of the huge task ahead that is reducing energy demand in the UK. 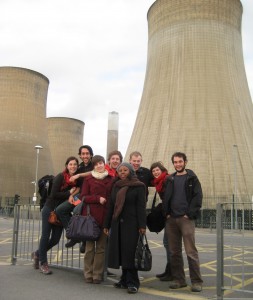 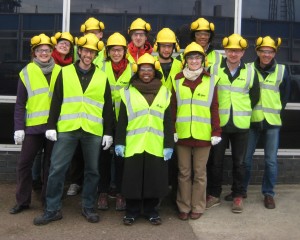