Electrification of domestic heating is frequently suggested as a measure to reduce carbon emissions. However, switching from gas to electric heating will introduce a large and highly variable new demand for electricity. Understanding the likely consequences of this switch requires much more detailed and accurate estimates of domestic heat demand than are currently available. LoLo PhD student Stephen Watson has recently published a paper on this topic in the highly regarded journal Energy Policy, titled: “Decarbonising domestic heat: what is the peak demand?“ 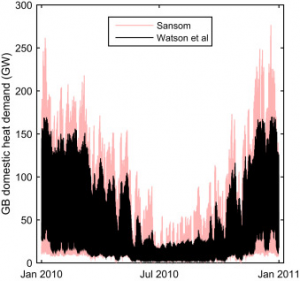 Stephen used a much larger dataset than has previously been used to assess this question, and developed a statistical model from this large dataset. He found that the peak half-hourly heat demand was 40% lower than the previous estimate. This suggests that, whilst still a major challenge, the electrification of domestic heating would not cause such severe spikes into the national electricity demand as previously thought.

Stephen found that the process from a first draft to a paper which could be submitted was a long one, but with the help of supervisors Dr Richard Buswell, Dr Jenny Crawley and Prof Kevin Lomas a much clearer and more rigorous paper was ultimately produced. Stephen found the comments of the reviewers at Energy Policy constructive and helpful in further refining the paper.