Attitudes in America to investing, resource limitations, and global warming: Irrational avoidance of the unpleasant

Within London’s scientific and academic community, the Grantham Institute for Climate Change at Imperial College is well known for the high calibre lectures it hosts. On March 14, 2012 Jeremy Grantham, the co-founder of the Grantham Foundation for the Protection of the Environment, delivered a lecture entitled “Attitudes in America to investing, resource limitations, and global warming: Irrational avoidance of the unpleasant”. Professor Sir Brian Hoskins, the Institute’s Director, introduced the speaker as the co-founder of GMO, a leading global investment management firm, and a man usually referred to as an “investment guru”.

Mr Grantham opened his presentation with several quotes, three of which were from President Eisenhower. He did not hesitate to describe the present US status quo as that of a Congress “owned by the financial and energy industries” and mentioned certain adversities, both personal and corporate, caused by challenging the irrationality of the US investment attitude, which he likened to their attitude towards environment issues. After a thorough investigation of historical economic and financial data, GMO identified a succession of 320 investment bubbles in world history, each lasting an average of 20-25 years, 33 of which were major. According to the speaker, this is evidence that, in terms of investing, people don’t learn from past mistakes. On the contrary, there exists an “increasing willingness to get carried away” and extreme optimism and confidence, characterised as an ability to ‘deny facts’, particularly in the case of the US.

The GMO heavyweight used the following graph to describe a paradigm shift in the price of oil. Mr Grantham considers this to be the first in a series of such shifts involving other resources and commodities. He identified two reasons for this: firstly, the explosion of world population and the inability to achieve sustainable growth for long periods of time; secondly, China’s huge demand for resources as it continues to develop. The country’s recent consumption figures, presented as percentages of world consumption, were astonishing with about 53% for cement, 48% for iron ore, and 47% for coal.

Food production was recognised as the limiting factor between resources and climate change, and feeding potentially 10 million people was seen as the real problem. Regarding the latter, the presenter commented on a possible future crisis due to reaching Peak Potash and Peak Phosphorus (essential ingredients of fertilisers) which could generate new security of supply-related problems. However, the Institute’s beneficiary tipped the audience that investing in food and fertilisers is where the future (and the money) lies and underlined the need for “a decent number of people with integrity” for a change to take place.

Answering a question from the audience on whether he foresees a paradigm shift in government, Mr Grantham replied that he doesn’t. However, he indicated that he sees one in corporations which, due to resource efficiency and their long-term interests, will be prompted to change the current climate themselves, removing the pressure from the shoulders of politicians to do so. On a question about the role of philanthropy, the speaker recommended that resources be placed in the hands of people with the capacity to persuade governments. 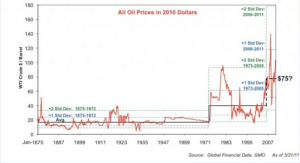