LoLo > News > UCL News > “Feel the rhythm! Feel the rhyme! Get on up, its bobsled time!” LoLo student gets team GB call up… for Bobsleigh.

“Feel the rhythm! Feel the rhyme! Get on up, its bobsled time!” LoLo student gets team GB call up… for Bobsleigh.

“Feel the rhythm! Feel the rhyme! Get on up, its bobsled time!” LoLo student gets team GB call up… for Bobsleigh.

Entering the ‘writing up’ stage of the PhD is both an exciting, yet testing time.  It is like the final 100m of a 400m race, you can see the finish line; it seems so close yet so far, you feel exhausted, suffering and wanting to stop. However, the drive to succeed keeps you going and the ground work has been put in, so now all that remains is to keep moving forward and complete the race (hopefully in a respectable position or equally, passing the Viva with no corrections or just simply passing in any shape or form).

Some might therefore say that being selected to represent Great Britain at Bobsleigh, two months into the final stage of my PhD would be a crazy thing to do.  Well, those people are correct and it is that same level of craziness that is needed to succeed in the sport. Following a series of trials and tests over the summer, I have been fortunate enough to get selected as part of the squad, who are building towards the 2018 Pyeongchang Winter Olympics.  My journey with GB bobsleigh begins over the next 6 weeks, where I have been given the opportunity to train and compete in the European Championships (Europa cup) in Austria and France.  During this time, I mostly will be heading down a 1-2km long ice slide at speeds of up to 135km/h, experiencing up to 4G’s of force. 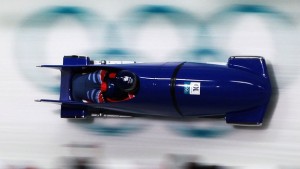 To provide some insight as to how I got involved, it all began back in May this year when a fellow PhD student saw an advert from British Bobsleigh calling out any “power athletes” to come to trials. He told me I should give it a try, so I did, more for fun than anything and turns out it went well. The test was based on our Bobsleigh specific athletic potential. The test involved a 60m sprint, four pushes of a roll bob over 40m (which is like a long shopping trolley) and a standing long jump to measure the explosive power in our legs. The first criterion of the day in order to progress to the remaining tests was to be able to sprint the first 30m in less than 3.8 seconds – already a tough ask, but a minimum standard for the calibre of athlete they were seeking. Following the success of the initial testing, I progressed to a couple more tests over the summer, which was based on the Bobsleigh push track in Bath (included in pictures 2 and 3 below). These tests involved pushing what is essentially a Bobsleigh frame (weighing 170kgs) on rails as fast as possible.  We then had our final trials in September and I got selected in October 2014.

Picture from the push test at Bath University in August 2014. 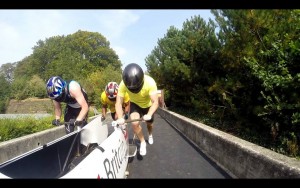 Picture from a training session at the push track in Bath University, September 2014.

I believe there are some similarities in doing a PhD and bobsleigh, for example, both my PhD and bobsleigh are centred around the winter months (as my PhD is based on understanding energy management to ultimately save energy on heating in UK primary schools).  Joking aside, having the right mind-set is essential for progressing in both. The PhD has taken self-belief, commitment, determination, hard work and perseverance. It is these same qualities that have made it possible for me to make selection into bobsleigh following a hard summer of training, testing and balancing my time to it in around my write up. I suppose being half Jamaican and watching Cool Running’s possibly helped me as we all know it’s in their blood. When I return from my first season in the middle of December, I will continue to use this determination to focus on successfully completing my thesis and reaching that finish line.

Recruitment is now open for 2015/16 - Studentships available for eligible applicants.