Some of the LoLo CDT students recently got the opportunity to visit the Environmental Ergonomics Research Centre within the Loughborough Design School department.  The visit allowed the students to tour the environmental chambers used to study human thermal environments.  Research carried out in these chambers tends to focus on investigating the body’s response to changing thermal environments.  The chambers were built in 2010 as part of the extensive refurbishment of the environmental ergonomics research centre.  There are two climatic chambers which include hypoxic facilities allowing climate and altitude simulation, and a climate controlled clothing test room.

The specifications of the Climatic Chambers are:

The students were shown examples of research currently being carried out on the influence of certain articles of protective clothing and footwear within hot, moderate and cold thermal environments.  First, the students were shown the clothing test room and introduced to the two thermal manikins used during some of the department’s research.  These manikins allow for researchers to monitor temperature changes on various sections of the human body individually, as the manikins contain numerous sensors to reflect the expected change of skin temperature during experiments.  The male manikin “Newton”  was set up to mechanically walk giving the students a chance to see how certain areas of the body reacted at different speeds with the computer interface showing real time temperature changes for each body part.  The female manikin “Victoria” has the ability to breathe mechanically and  so has been used for various research projects across departments including the Civil and Building Engineering department’s air quality in building research.  The test room also contains an Infra-Red camera to see temperature variations on the body.  Richard Jack (CDT PhD student) kindly volunteered to be an IR model, allowing for the difference to be seen before and after wearing a thermally protective jacket commonly worn by fire-fighters.  Second up for the students was to experience the second environmental chamber to show the time lag of some temperature sensors for responding quickly when moved from one temperature to another.  The second chamber however was set at a slightly chilly 0ºC and all students agreed that they felt a very obvious difference in air movement as well as temperature (even though the air velocity was the same in both chambers).

Overall, the tour was an extremely beneficial experience for all students, giving them the opportunity to observe thermal research which is potentially linked in with their own research.  On behalf of the LoLo centre and the CDT students who attended the tour, thanks goes to Dr Simon Hodder who kindly showed all the students around the facilities and answered all questions the students raised.  The tour certainly gave the students many things to think about related to measuring human thermal environments, and if you believe some of the students present, then the tour also gave them potential ‘hypothermia’ though in reality it just showed which students were more used to the cold – the differences in thermal expectations clear to see! 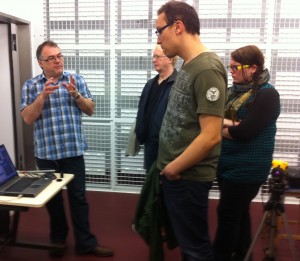 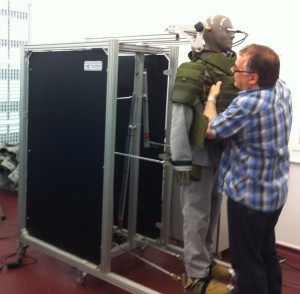 A brief account of the CLUES: Energy in the Locality conference which took place at UCL

Sustainability: Concepts and Materiality - A one day interdisciplinary workshop on sustainability