Energy for Less at the Green Man festival

Energy for Less at the Green Man festival

As the old nursery tale goes ‘If you go down to the woods today, you’re in for a big surprise’…well if you happened to venture into the Welsh Black Mountains between the 15th and 18th of August then you were certainly in for a surprise at the Energy for Less stall hidden within Einstein’s Garden.  Yes it was that time of the year again when the Green Man festival opened its doors to members of the public looking for a long weekend of music, comedy and of course nuggets of educational delights within Einstein’s Garden.

Following on from the success seen last year from the Leeds CDT with their Energy Factory various PhD students and researchers showed interest in being involved in a similar activity early on this year.  The final team consisted of numerous LoLo CDT students, Paula Morgenstern, Kate Simpson, Ashley Morton, Vicki Tink and Charlie Morris-Marsham as well as CDT students Chris Emmott and Sheridan Few from the Energy Futures Lab at Imperial College, alongside Will Usher (PhD student at UCL) and Paolo Agnolucci (Lecturer at UCL).  After numerous brainstorming sessions and countless emails four concepts were chosen to become the Energy for Less stall.  Months of planning cumulated in various DIY attempts, painting, decorating and ultimately all led to the creation of four exciting activities – Ready Steady CO2, Play your Energy Cards right, Laser Balloon Popping and a Thermal Imaging Photo booth.

There was plenty of opportunity to get those competitive juices flowing with our ‘Ready Steady CO2’ transport game where the aim was to cross the finish line first by choosing between using a car, the bus or a bicycle to get there….easy enough right?  There was a catch though and that was you have to start thinking about how much CO2 you release with each mode of transport and with only 7 balls of CO2 permitted to be used to get to the finish some strategic and environmentally friendly options needed to be considered.  Yet you had to watch out as there were a few spanners thrown into the works in various forms such as traffic jams, hydrogen power…and even eating too many hamburgers!

The competitive nature of some festival goers showed up again when they moved onto ‘Play your energy cards right’!  Based on the good old family favourite TV game show of the 80’s Play your Cards right – minus Bruce Forsyth of course but with energy thrown in instead.  The cards weren’t your normal pack of playing cards, instead they were playing cards containing energy consuming appliances or activities and all had their energy value in kilowatt hours included.  The aim of the game was to correctly get to the end of the card stall identifying if the new card was higher or lower in energy consumption.

If there is one thing to spark people’s interest in your stall…then a large warning laser hazard sign is bound to do it!  The third activity on the stall had just that and a big red push button just to entice the children (and adults!) even more.  The aim of this activity was to demonstrate why solar cells are black by using balloons to show how light from a laser is absorbed differently by different colours….and successfully cause a few jumps (and the odd scream) from participants when the balloons pop!

Finally the stall was completed by its very own thermal imaging booth.  Festival goers had the opportunity to get creative with various materials from insulation blocks to fluffy pipe cleaners, and creative they did get from head pieces to monocles and even skirts!  Using their props they could get a thermal image taken in various poses to learn about the different thermal properties of the materials and also feed their own curiosity of observing thermal images.  All participants have also been given the opportunity to keep their own image after by them being uploaded online for participants to download. Check out the participants’ heat transfer and see if you can guess the insulating materials used for accessories! There is a handy temperature scale on the right hand side of each image.

This year it seemed that the weather gods were in a good mood with a mixture of glorious sunshine and shattered light rain showers…and a very surprising lack of mud!! The weather certainly seemed to keep everyone in good spirits and meant plenty of festival goers passed by our stall and got involved with all activities.  The range of activities seemed to go down brilliantly with kids and adults alike and even showed some family rivalry on certain games…to the extent that many children made numerous trips back to the stall over the weekend to get better and better at them!  This only helped cement some of the knowledge and facts given to them whilst taking part in the various activities, a clear sign that public engagement of this type is a brilliant way to get across new knowledge.

As a way to see how effective our activities were as public engagement a comment board was left for participants to leave feedback on any of the activities daily.  Comments such as ‘save energy share a bath’, ‘bikes rule no more CO2’, ‘think before use’ and ‘subsidise those using green energy’ it was obvious to see that people taking part had left thinking more about the energy and/or emissions involved!  Aside from the comments written down the verbal feedback to all involved with the stall was nothing short of positive and really did make the full team feel like they had been part of something extremely worthwhile and more importantly had fun whilst doing it! 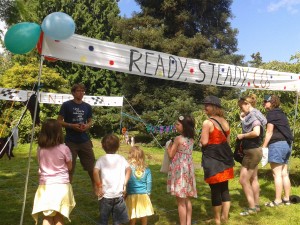 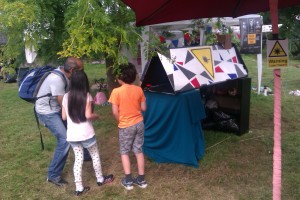 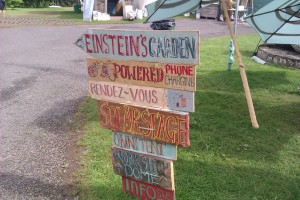 Energy Demand in Context – A week in Loughborough