LoLo is the London-Loughborough EPSRC Centre for Doctoral Training in Energy Demand – a collaboration between the UCL Energy Institute and Loughborough University. Its aim is to help deliver deep reductions in CO2 emissions by 2050 through an innovative, multi- disciplinary, high impact research and training programme. The Centre’s core focus is on the energy performance of buildings, and their multiple interactions with people and the wider energy system.

Our next Annual Colloquium will be held on the 9 November 2017. Our students are among the brightest in the field, working on topics of profound practical importance; the energy leaders and pioneers of tomorrow who will take on senior roles in academia, industry, commerce, and policy formulation. The conference is your opportunity to meet with them, their academic supervisors and our industrial partners, to hear about and discuss the latest insights and findings in energy demand research, and to contribute to their work.

Title: Energy Demand: What are the challenges now?

ENERGY DEMAND: What are the challenges now?

Mitigating climate change to deliver the goals of the Paris Agreement and UK carbon budgets requires an energy transformation by mid-century. Despite falling costs, renewable electricity generation options are not a panacea. Most international studies show that global reductions in energy intensity will need to reach 3% annually, perhaps more in service economies like the UK. This will involves going well past the traditional energy efficiency agenda, of incremental and cost effective improvements at modest cost, to include options that are not currently attractive to private investors.

The new challenge is also wider than demand reduction. Variable and inflexible electricity generation will put a premium on the flexibility of energy demand. This requires either that user practices are changed or that they are decoupled from the timing of energy supply. Published UK low-carbon scenarios rely heavily on increased electrification of heat and transport, and there are promising signs in transport, at least for light vehicles. However, electrification of space heating looks challenging even at the scale of some individual buildings. At the system level, large scale electrification implies either that major electricity system assets are unused in summer, or that inter-seasonal energy storage is deployed. All of these challenges raise new research questions: for technology, business models, social change and governance 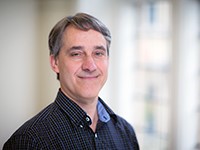 Nick Eyre is Professor of Energy and Climate Policy, and a Jackson Senior Research Fellow in Energy at the ECI and Oriel College. He was recently appointed as Champion of new UK Centre for Research in Energy Demand (UKRED). In this role he is consulting with the UK energy research community to develop a consensus around a research agenda, to build an inter-disciplinary research consortium and plan a programme of research with a view to a new End Use Energy Demand Centre starting in April 2018.

Nick is a Co-Director of the Oxford Martin Programme on Integrating Renewable Energy, which is undertaking research on the combined, technical, economic, social and policy issues in moving to electricity systems with very high levels of variable renewables.

Nick has been Programme Leader for Energy in the ECI since 2007. From 2007 to 2017, he was a Co-Director of the multi-university collaboration, the UK Energy Research Centre, leading its research work on energy demand (2007-2014) and decision-making (2014-2017). He was a Co-Investigator within the Infrastructure Transitions Research Consortium from 2011-2017.

Nick worked at the Energy Saving Trust from 1999 to 2007, initially as Head of Policy and, from 2002, as Director of Strategy. He was responsible for the Trust’s work on public policy issues, business development and long term business strategy. In 2001, he was seconded to the Cabinet Office, Performance and Innovation Unit, where he was a co-author of the Government’s Review of Energy Policy. He led work streams on energy efficiency and long term energy scenarios.

LoLo Colloquium 2017 - The annual meet-up of the LoLo community